5 Surprising Facts About the Last Frontier

With its magnificent glaciers, rich wildlife, and miles and miles of untouched wilderness, Alaska surely has a special charm. In fact, being in The Last Frontier can sometimes feel like you’re on a completely different planet.

We are sure you already know a thing or two about Alaska. We’re not here to tell you how beautiful aurora borealis is or that you should look out for grizzly bears. Instead, we want to share some less commonly known facts about this unique state. Read on! 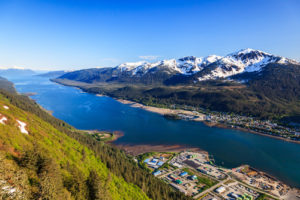 Juneau, the capital of Alaska, boasts a population of 32,000 and is one of the biggest cities in the state. That is not the city’s most distinguishing feature, however. If you decide to visit Juneau, you’ll be able to do so only by plane or ferry. There have been numerous attempts to create a road to Juneau and all of them have failed. This is because the city is surrounded by giant glaciers, ice fields, as well as Alaska’s largest national forest, the Tongass.

Alaska has more shoreline than all of the United States combined. Without its numerous islands, Alaska has 6,640 miles of coastline. To put things into perspective, the shoreline of Florida, which takes second place, stretches for 1,350 miles. When islands are considered, this fact becomes even more fascinating –  Alaska’s shoreline amounts to incredible 33,904 miles.

Back in 1927, when Alaska was not yet a state, George Parks, the governor at that time, organized a flag-making contest. Creating the flag of Alaska was to be the first step towards making the Last Frontier a proper state. A great number of kids participated in the contest and a 13-year-old Benny Benson won. The little orphan created the flag we know today, with the Big Dipper and Polaris on a dark blue field.

There aren’t many facts that illustrate the uniqueness of Alaska as this one does. While every state has its own weird laws, no other state comes close to the Last Frontier when it comes to outlandish regulations surrounding moose. For instance, if you’ve ever wanted to get a moose drunk, know that it’s a big no-no. Another strange law states that you should never whisper to a person’s ear if they are hunting for moose, while another prohibits you from pushing a moose out of a moving plane. 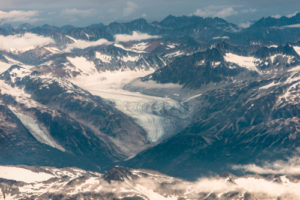 When you think of visiting a national park, you probably imagine your run-of-the-mill hiking and wildlife viewing activities. While you certainly can do that in other parts of Alaska, visiting Aniakchak is a different experience entirely.

This 3,700-year-old volcanic caldera is not only extremely remote and unreachable by road but is also characterized by extremely volatile weather that can change from perfect serenity to wild winds and heavy rainfall in a matter of minutes. There’s no wonder that only the bravest and most adventurous travelers decide to visit Aniakchak every year.

While we are all encouraged to stay at home and protect ourselves and our family from the COVID-19 outbreak, that doesn’t mean that we can’t daydream about all the wonders that Alaska has to offer. When things go back to normal, the Last Frontier will still be right here, waiting for you to explore it. In the meantime, enjoy some quality time with your family and stay safe.