A Brief Guide to Watching the Northern Lights in Alaska 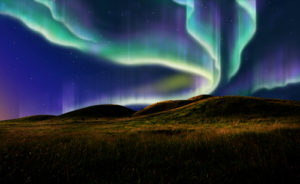 As one of the most popular winter destinations, Alaska has a lot to offer during the coldest months of the year. In addition to the rich variety of winter activities and the stunning arrays of Christmas lights, visiting the Last Frontier also brings an opportunity to observe one of nature’s most beautiful phenomenons – aurora borealis.

What many visitors don’t know, however, is when and where they should go on their northern lights tour in Alaska. When does the aurora season begin? In this article, we’ll tell you all about seeing the northern lights in Alaska and getting the most out of this magical experience. Read on!

What is aurora borealis?

Most of us are familiar with the appearance of the polar lights and we can all agree that they look magnificent. But what is aurora borealis exactly?

Simply put, these light displays are caused by particles generated by sun flares. As these electrically charged particles enter the Earth’s atmosphere, they collide and create amazing light displays above the north and south poles. In fact, only the lights on the north pole are called aurora borealis. In the south, these light shows are known as aurora australis or southern lights.

When is the best time to see aurora borealis?

While these magical light shows happen throughout the year, they are most visible during the colder months of the year. From September to March, the polar lights near the north pole become more brilliant and intense thanks to the clear and cold winter skies. 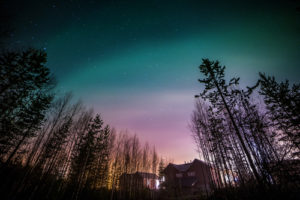 In addition to the time of the year, you should also consider the year itself. Since the intensity of the polar lights depend on solar activity and the sun has periods of low and high activity during an 11-year cycle, the northern lights will be more intense during the peaks and less intense during the lows.

The last solar maximum happened in 2014 and the next one is expected in 2024. Still, that doesn’t mean that you should wait 5 years to see the northern lights! Even if you don’t get to see the lights at their brightest, you are still likely to catch marvelous displays on clear dark nights.

What are the best places to see the northern lights in Alaska?

Now that you know when to go polar light-seeing, you’re probably wondering where to go for the perfect experience. Here are some of the best locations for catching aurora borealis:

Experience the magic of the Last Frontier today! 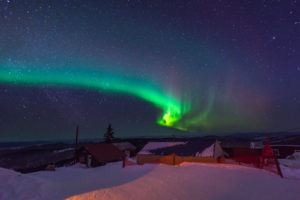 No other natural phenomenon can truly compare to the northern lights. And what better place to experience the incredible beauty of the aurora than Alaska?

If you want to add a little bit of magic into your life, why not choose your destination today and start packing? The polar beauty awaits!